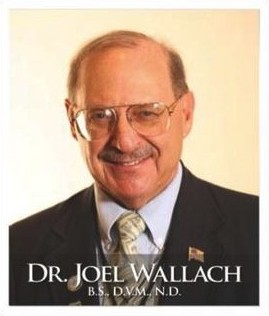 Dr. Joel Wallach has published numerous books on dietary deficiencies and their resultant effects. Dr. Wallach conducts approximately 300 lectures annually to overflowing and enthusiastic audiences and has sold over 40 million cassettes/CD’s which are recordings of the lecture “Dead Doctors Don’t Lie”.

Dr. Wallach’s research has resulted in the publication of more than 70 peer reviewed and refereed journal articles in the fields of nutrition and pharmaceutical research, and he has made major contributions to eight multi-authored text and reference books on these subjects. The following is a general summary of his educational and biomedical research credentials:

He obtained a Bachelor of Science in Agriculture from the University of Missouri in 1962, with a major in Animal Husbandry (Nutrition) and a minor in Field Crops and Soils. In 1964 he was awarded a Doctorate in Veterinary Medicine (D.V.M.), also from the University of Missouri. Thereafter, he completed a three-year (1965-68) post-doctoral fellowship at The Center for the Biology of Natural Systems at Washington University in St. Louis, Missouri. In 1982 he obtained a Doctorate in Naturopathic Medicine (N.D.) from the National College of Naturopathic Medicine in Portland, Oregon.

Born and raised in Missouri, Dr. Joel Wallach attended The University of Missouri, where he received a Bachelor’s degree in Science of Agriculture. A veterinarian for 30 years, he worked as a research veterinary pathologist with The National Institute of Health for The Center for the Biology of Natural Systems, Washington University, St. Louis, Missouri; Yerkes Regional Primate Research Center in Atlanta, Georgia, at Emory University. Having discovered and identified the first animal models for cystic fibrosis – monkeys – he found that he could reproduce their condition at will because it was a nutritional deficiency. His find offered great promise for children with the disease, but when he made it public, the institute fired him on 24-hours notice. Chagrined and perplexed, Dr. Wallach made the decision to go to medical school so he could treat children for cystic fibrosis himself.

Realizing that traditional medical school was likely to be as repressive as the National Institute he accepted an invitation to teach nutrition at The National College of Naturopathic Medicine in Oregon, not even knowing what a naturopathic doctor was. When he learned that he could be a primary care physician-deliver babies, sew up chainsaw wounds, write prescription and get paid by insurance – all through a program that encouraged interest in nutrition, he simultaneously enrolled as a full-time student. Soon people were flocking to the college clinic.

Doctor Wallach’s innovative slant is derived from his background in veterinary medicine. Because there’s no health insurance, animal products such as meat and dairy are kept affordable by preventing and curing diseases with nutritional formulas in animal feed. When he started incorporating similar nutritional formulas with people, word got out that, “if your not happy with your doctor, go see Doctor Wallach, he’ll treat you like a dog, but you’ll get better.”

1988 Recipient of the 1988 Wooster Beach Gold Medal Award
for significant breakthrough in the basic understanding of the cause and pathophysiology of Cystic Fibrosis awarded by the Association of Eclectic Physicians.

1991 Nobel Prize Nominee – Medicine
for his stunning discoveries in the use of trace minerals to prevent catastrophic diseases in the newborn. Nomination by the Association of Eclectic Physicians (Chartered 1823).

Dr. Wallach worked on rhino and elephant capture and marking conservation programs for the government of Zimbabwe and South Africa, also performing autopsies on culled and poached animals.

A NIH training grant for $7.5 million was provided in 1965 to Marlin Perkins of the St. Louis Zoo and Barry Commoner of Washington University and Shaws Botanical Gardens who joined to form the Center for the Biology of Natural Systems.